Historical Connection with Shenandoah College and Conservatory of Music

Here is where the music students would practice (from 6am to 12 Midnight) on the old 1927 Moller four manual pipe organ and the Chickering piano which we still use. In addition, their recitals, concerts, and graduations were held in the church. After 1960, the institution relocated to Winchester where Shenandoah University remains. The "Dayton era" alumni hold an annual reunion and hymn sing each April in our church where a memorabilia display can be viewed. Hopefully, a "Shenandoah Heritage Concert Series" will be established to celebrate the history of the "Dayton era." 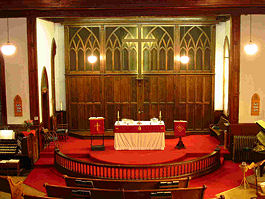 Shepherd of the Valley held its first worship service in Dayton, VA on Palm Sunday, April 13, 2003, after purchasing the old "campus church" of the Shenandoah College and Conservatory of Music.

The original church structure was built in 1878, destroyed by fire in 1903, and was rebuilt within a year. At that time, it was an Evangelical United Brethren Church. The EUB later merged with the Methodist Church. Through the years, the old church had various tenants and experienced periods of neglect. We Lutherans bought it "as is" and have undertaken various renovation projects.

Before moving to Dayton, Shepherd of the Valley congregation worshipped in the Bridgewater Masonic Lodge (1994-2003) and in the Dale Enterprise School House (1982-1994). Pastor Ted Schulz joined us on November 1, 1996.

A fascinating historical note is that the Lutherans returned to Dayton after 150 years. According to historian John W. Wayland in "History of Dayton, VA" (page 259), In 1853 the Lutherans built the church in Dayton, now owned by the Church of the Brethren. And according to Charles Willis Cassel, Ed., in "History of the Lutheran Church in VA and East TN" (page 212), A Lutheran Church built here (Dayton) in 1853, and for years served by pastors of the Rockingham Parish of the Virginia Synod, was sold to the Church of the Brethren, the members transfering their membership to the nearest Lutheran Church.

The Luther emblem consists of a black cross on a red heart against the petals of a rose. It symbolizes the truth that even under a cross the heart of a Christian abides on roses.